Go to content
×
ICON OF THE MADONNA OF PIA
We read in an operetta on our Sanctuary written by the historian P. G. Salvi O.S.B.
that "The Lords Don Ottavio Maria Prasca, canon of the collegiate church of Finalmarina and
Dr. Cristoforo Maria,his brother,in 1728 they had it built at their own expense
the HIGH ALTAR with the most gracious ANCONA and the balustrades,
all done with  "fine marbles and mixed Palermo". 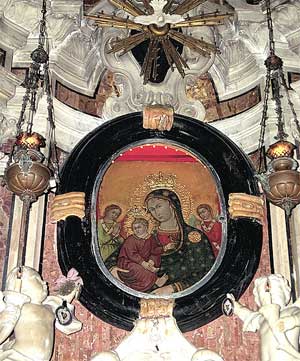 This Ancona encloses the sacred ICON OF THE MADONNA OF PIA in an oval frame of black marble,
which is the heart of our Sanctuary.
The icon is a wooden table reproducing the Madonna and Child.
Various clues indicate its origins at the beginning of the early fifteenth century, which is confirmed by the stylistic examination of the painting on which precise chronological indications are missing.
This means that in the previous period there had to be another effigy of the Madonna in Pia's church, which was later lost or replaced for reasons unknown to us. The current framework, in fact, makes its appearance in the church of Pia in 1533 year in which it was exhibited in the grandiose wooden frame inlaid by Fra Antonio from Venice. Later the upper part terminating in an acute arch was eliminated and some other modifications were made. It can be assumed that the painting was originally the central panel of a polyptych, then reduced to the current proportions due to the deterioration of the surrounding parts.
As for the author, an attribution to Niccolò da Voltri, active between 1385 and 1417, was proposed by the great critic Adolfo Venturi: the identification is based on a comparison with a very similar subject, clearly signed, existing in the Genoese church of S. Donato and that presents strong analogies with the painting of Pia as to the compositional structure of the group represented.
The Madonna is surrounded by two angels with crossed stoles and reveals, in the static composition and in the peculiarity of the decoration, a persistent Byzantine influence filtered through a mediation of Sienese art. The picture, in any case, derives its importance also from the fact that it constitutes one of the rare testimonies of Ligurian painting between the 300s and the 400s.
We have recently suggested the funerary origin of our painting, in the sense that it was commissioned in suffrage of some soul.
In fact, the image of the soul that frees itself from earthly bonds hovers like a bird recurs in all medieval art (we recall here the same vision of the soul of St. Scolastica, just deceased, that St. Benedict saw in a dove).
There is also, in this painting, a detail that makes it absolutely unique. In no other representation of Jesus in the arms of the Mother, we see the Child velvet the plant of his foot.
Gesture which, on the other hand, is quite frequent in children who, still barefoot, play on their mother's lap ...

Icon description  by Benedictine Abbot Felice Vaggioli written in 1897
Among the most beautiful and ancient image of the Mother of God ,of  which is rich  christianity, no doubt is to be counted that of Our Lady of Finalpia under the invocation of Maria Pia , famous since the middle ages for countless graces and miracles in favor of humanity .
It is painted  on wood , over a thin prepared plaster  surface.
The picture is , one meter and thirty centimeters high, on seventy-five cm wide.
The background , of which  we can see  only few stretches , is dark blue with stars , from which stand out beautifully the venerable likeness of the Virgin represented in half figure , standing 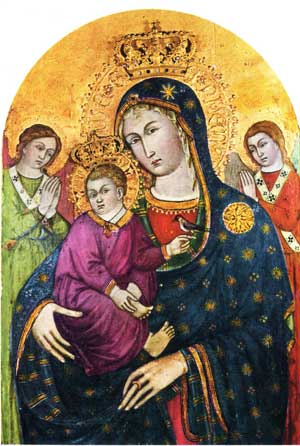 Her head bent somewhat toward the right shoulder , her face is full of grace and majesty mixed with sadness and seriousness, compliant to the style of the ancient Madonnas.
Light tan complexion , large pupils , which are composed in devotion , long and sharp nose , small mouth , regular and almost round cheeks , down the neck and the forehead is hidden in part , as well as hair and ears , from fine white veil , bordered with red oriental style , that falls past her shoulders , and above it a large blue cloak  star-studded , with golden fimbriae ,  envelops  her august person . At the top of the forehead , on the brim of her blue robe , holding a golden rose  with an amethyst in the middle ; a little more to the left is a shining star of gold , and likewise on the same mantle , between the chest and the left shoulder , another big gold star with a ruby in the center .
The tunic of the SS . Virgin is scarlet  with golden embroidery golino , and surrounds her head a large golden halo from which protrude slightly shiny gold  the words of the angelic salutation :" Ave gratia piena" , Hail full of grace .
With her left hand  the divine Mother holds close to her person the right corner of her robe , and with her right harm  supports and tight to her breast Baby Jesus , dressed in pink tunic with golino and  cuffs  arabesque in gold , and a narrow belt tight his vest.
The divine Infant , curly hair gold in color , has pretty appearance and serene mixed seriousness has his right arm hanging , with his small outstretched hand holding the sole of his left foot resting on the right knee . The left arm towards  the heart of his Mother , and on the index of his hand has a colorful bird .
At each side of the Virgin are two beautiful painted seraphim with joined hands and made ​​up on the chest , in act  of worship . Their faces are very young and in pious prayer : their long , blond hair falls on their shoulders . The one on the right is a little older then his companion , and wearing a tunic -green - orange sprinlked with  flowers of brown color , and has reddish- black wings . The one on the left has a red tunic , and his wings are a deep green . Both have a halo around their head , and a priestly stole  colored  white, marked by black crosses , falls on their shoulders from the chest , with the two ends extends over the hips .
Note that in 1897 the background of the picture was " dark blue with stars " , while now it is golden . The ancient custom of the faithful of pinning ( with pins ) supplications and prayers directly on the painting had reduced the background of the picture in a sorry state . Towards the middle of the XX century,  a painter ( P. Leandro Montini ) had remedied the damage then recreating the golden background , which once was already there , as appeared from the prepared plaster surface.
the representation of the amethyst is still captured, no longer that of the ruby
the insertion of the Crown of the Madonna (presumably after 1920) has made it more difficult to read the writing of the nimbus of the Madonna.
Back to content